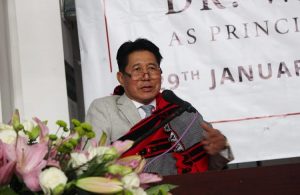 Kohima College, Kohima accorded farewell to it’s Principal Dr. Watijungshi Jamir on his being posted to the Directorate on promotion as Additional Director, Department of Higher Education, Government of Nagaland.

A grand farewell programme was organized by the college in appreciation of his service. Dr. Watijungshi Jamir, joined the college as it’s Principal on 10th July, 2015 and served the college for three and half years.

Dr. Watijungshi in his speech stated that he was the seventh and the luckiest Principal to serve the college. During his tenure, two mega-events had taken place -the college Golden Jubilee and the 2nd Cycle of NAAC Assessment and Accreditation, both held in 2017. The fund-flow under the RUSA and the UGC were also at its highest peaks resulting in many developments and revamping of the the college. His tenure saw the successful completion and inauguration of the college Parking Roofing, Tribal Museum, RUSA Toilet, Commerce Stream Building, New Library, Expansion of Floriculture Unit, 100 Bedded Boys Hostel, IT enabled Classrooms, Water ATM, Legal Aid Clinic, installation of Solar Panels, and near completion of Indoor Sports Arena, to name a few. He further thanked the Vice Principal, the Kohima College Teachers Association (KCTA), HoDs, teaching faculty, ministerial staff, student’s council, and the student community for their unstinted support and cooperation in making his term of office a comfortable one.

Smti. Thinuokhrienuo Tsiekhano, Vice Principal, KCK in her speech on behalf of the administration stated that over the years, KCK had faced many hardships, but because of able administrators like Dr. Watijungshi, the college has been lifted to the present prestigious status, and she further reiterated that the principles of Good Governance which is marked by Accountability, Responsibility and Transparency that has been introduced by Dr. Watijungshi is at its highest practice in Kohima College, Kohima, and that it would do well if other departments and institutions follow suit.

On behalf of the Teaching Faculty, Smti. Moanungla Kevichusa, HOD, English Dept., and senior-most faculty of KCK encapsulated the contributions of Dr. Watijungshi during his term of office for three and half years. She recollected the many laudable values he imbibed through his exemplary life. She further stressed on the many administrative reforms he brought about, most remarkable of which was the innovative system of transparency and accountability in all financial matters, and also decentralization of responsibilities.

Special numbers were performed by Smti. Sungjeminla, Asst. Professor, English Dept., the Everpresence and by the teaching faculty of KCK. The program was chaired by Shri. Keneilesa Neikha, President KCTA and HOD History Department, KCK.

The author, Dr. Neikehienuo is currently working as an Asst. Professor in the Dept. of Functional English, Kohima College, Kohima. Aside from teaching, she runs the blog Random Rantings where her writings primarily focuses on current social issues. She is also a musician and a baker.

My Mother’s Daughter is a novel on domestic violence which portrays the vicious cycle of violence and how it continues and extends to the lives of children as they become adults. It narrates the lives and experiences of a mother and daughter as domestic abuse victims. Dr. Eastern Kire rightly states that this book is a story not just of violence, but a cycle of violence and the struggle to understand the kind of woman who repeatedly becomes it’s victim.

Dr. Kevileno Sakhrie, in her address stated that the novel takes us around the myths surround domestic violence. ”Domestic violence is not new in Naga Society. What is new is that with this book, the veil is lifted, what is hushed in is now exposed.” She further stated that the sad truth is our failure as a community to recognize what a victim looks like and also our failure to protect them. She encouraged the author and the emerging young women writers to continue to write about such issues.

In the Publisher’s Note by Dr. Lanusangla Tzudir of Heritage Publishing House, Dimapur, she spoke about how the voice of the women writers from Nagaland have caught the attention of scholars from all over the country. She further congratulated Kohima College for producing a team of writers (teachers and students) and encouraged them to continue to be each others’ torch bearers. She also stated that this novel is the first fictional novel for Heritage Publishing House

The author, Dr. Neikehienuo in her speech thanked the women and girls who have had the courage to share their experiences with her through which she was able to document and write these stories on. ”This book is theirs as much as it is mine”, she stated. She further said, ”This book is written with the sole purpose of reminding us of different realities parallel to our own. It is not a story of defeat but about building trust and supporting one another and how important it is for girls and women to find and empower one another as we try to find our ‘selves’.  It is time to shift the narrative -a narrative that is not so focused on revenge, hatred, or bitterness but a positive narrative which will open further avenues for a conversation that will find answers for young girls- the women of tomorrow.”

The Reviews from a Reader’s Perspective was given by Smti. Moanungla Jamir Kevichusa, Assoc. Professor & HOD, Dept. of English, Kohima College, and from a Male’s Perspective by Dr. Kekhrie Yhome, former Asst. Professor, Delhi University.