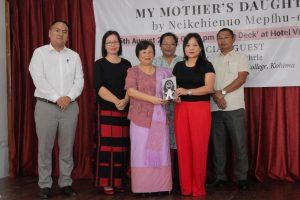 The author, Dr. Neikehienuo is currently working as an Asst. Professor in the Dept. of Functional English, Kohima College, Kohima. Aside from teaching, she runs the blog Random Rantings where her writings primarily focuses on current social issues. She is also a musician and a baker.

My Mother’s Daughter is a novel on domestic violence which portrays the vicious cycle of violence and how it continues and extends to the lives of children as they become adults. It narrates the lives and experiences of a mother and daughter as domestic abuse victims. Dr. Eastern Kire rightly states that this book is a story not just of violence, but a cycle of violence and the struggle to understand the kind of woman who repeatedly becomes it’s victim.

Dr. Kevileno Sakhrie, in her address stated that the novel takes us around the myths surround domestic violence. ”Domestic violence is not new in Naga Society. What is new is that with this book, the veil is lifted, what is hushed in is now exposed.” She further stated that the sad truth is our failure as a community to recognize what a victim looks like and also our failure to protect them. She encouraged the author and the emerging young women writers to continue to write about such issues.

In the Publisher’s Note by Dr. Lanusangla Tzudir of Heritage Publishing House, Dimapur, she spoke about how the voice of the women writers from Nagaland have caught the attention of scholars from all over the country. She further congratulated Kohima College for producing a team of writers (teachers and students) and encouraged them to continue to be each others’ torch bearers. She also stated that this novel is the first fictional novel for Heritage Publishing House

The author, Dr. Neikehienuo in her speech thanked the women and girls who have had the courage to share their experiences with her through which she was able to document and write these stories on. ”This book is theirs as much as it is mine”, she stated. She further said, ”This book is written with the sole purpose of reminding us of different realities parallel to our own. It is not a story of defeat but about building trust and supporting one another and how important it is for girls and women to find and empower one another as we try to find our ‘selves’.  It is time to shift the narrative -a narrative that is not so focused on revenge, hatred, or bitterness but a positive narrative which will open further avenues for a conversation that will find answers for young girls- the women of tomorrow.”

The Reviews from a Reader’s Perspective was given by Smti. Moanungla Jamir Kevichusa, Assoc. Professor & HOD, Dept. of English, Kohima College, and from a Male’s Perspective by Dr. Kekhrie Yhome, former Asst. Professor, Delhi University.