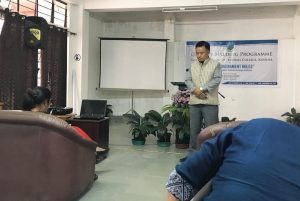 A one-day Capacity Building Programme on “BASIC GOVERNMENT RULES” was organized by the IQAC, Kohima College, Kohima for the Faculty and Office Staff of the college, with resource person Dr. Hovithal Sothu, Deputy Director, ATI.
Principal, KCK, Dr. Watijungshi Jamir, while delivering the keynote address said that the year 2003 was known as the Year of Capacity Building. He referred to “capacity” in terms of liquid, solid and aerial mediums –that when anything exceeds its capacity, it bursts/overflows. He stressed on the need for teachers to increase capacity & maximize effort. He stated that the college teachers and staff have so far been maintaining the UGC service rule of minimum working hours i.e., 5 hours per day, and that this training program was a golden opportunity for college teachers and office staff to learn basic government rules.

Resource person, Dr. Hovthal, stated that he had hardly known any service rules during his 10 years of teaching in Kohima Science College, as teachers are always so pre-occupied in engaging with the students & trying to broaden their knowledge of their subjects.
While delivering a detailed explanation of the The Nagaland Government Servants Conduct Rules 1968, The Nagaland Services Discipline and Appeal Rules 1967, Management of Files, Different forms of Official Communications and Noting & Drafting Skills, Dr Hovithal encouraged the teachers and office staff to maintain sincerity, punctuality and devotion in their work ethics. He stressed on the importance of integrity by stating that they should “do what is right even when no one is watching”.