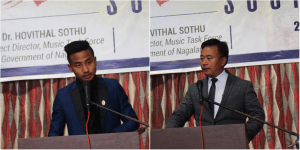 Speaking on the occasion, Dr. Hovithal called upon the students to assess & evaluate their traits and skills which will help them in setting an aim for themselves as they venture out in the real world. He stressed on the importance of having a vision, and to use it for the good of the society. He further stressed that the key to staying in power is to have a vision, to pursue said vision, to never give up even during trying times, and to continue to be humble and grounded. He encouraged the students to develop the qualities of determination and perseverance.

Smti. Thinuokhrienuo Tseikhanuo, Vice Principal, KCK, in her welcome address stated that the college life of a student is the most crucial as their views about life are formed during this period. The student develops confidence and principles, suspicions and doubts. She encouraged the students to strive for the good values that they’ve accumulated over the years, and hoped that they will be guided by the true meaning of education. She further stated that change in society should begin from the smallest unit, i.e, the individual, and wished them courage with the hope that they become individuals who are looked up by the younger generations.

Ms. Khrievi Sahu, Youth Co-Ordinator, NBCC prayed for the outgoing students, and short speeches were delivered by Ms. Asani Victoria on behalf of the outgoing students, and Mr. Zapoi Dzüdo-O on behalf of the remaining students. A special song was presented by Mr. Sungtimen Alinger, and the invocation prayer was pronounced by Ms. Tsuken Lam. The programme was chaired by Ms. Khrüvotalü Ringa, and Mr. Lithrongba Jingru delivered the Vote of Thanks.