Kohima College, Kohima inaugurated its Tribal Museum on July 31. Dr. Eunice Alinger, Asst. Prof., History Department briefed about the threat of ancient Naga artifacts being sold freely in the market to people who do not know anything about the Naga history and culture. More than 2 lakhs Naga artifacts are in display in museums all over the world – Vienna, New York, Oxford, etc – and the Nagas now have very little of what is originally theirs, she pointed out. She further stated that as Nagas do not have a written history or language, “we depend solely on oral history which is now a dying practice.” Hence, “it is most crucial that we preserve and protect our tradition and culture.” It was with this purpose that the college had decided to open the museum.

The inauguration and unveiling of plague was done by Dr. Watijungshi Jamir, principal, KCK, who had first conceived the idea of opening a Tribal Museum in the college and encouraged the History Department to take up the initiative to set it up.

The faculty donated a certain sum of money which was sanctioned for the establishment of the museum. Artifacts in the museum were also donated or lent by the Principal and faculty members of the college.

Dr. Watijungshi in his speech stated that the biggest museums in the world start with just one artifact, and that the Tribal Museum of KCK which now has over a hundred artifacts will one day have a generous number of artifacts and visitors as well. He encouraged the History and other departments of the college to make use of the museum for research purposes as well. Meanwhile, the principal requested the various departments to apply for Museum Development funds to NEIHA (North East India History Association) as the college is now eligible for it. He concluded with hopes that his successors will continue the tradition of maintaining and preserving the valuable Naga artifacts.

Dr. Kekhrieseno Christina, Asst. Prof., Sociology Dept. gave an account on the use and significance of the Traditional Lock. Naga ancestors, she stated, were known for their honesty and sincerity and their value system was an everyday experience; one such experience was the Traditional Lock – two long sticks put across the door symbolizing the absence of the owner of the house. No one dared to open the door as it was almost a taboo to do so, she highlighted, adding the owner could be away for a day or months but there was no fear or worry of losing one’s belongings.

Dr. Kekhrieseno further stated that in the present day, this value system that was once an integral part of the Naga society has become a rare incident and as Nagas, “we find ourselves at a crossroads as many of us are unaware of our rich culture and practices.” She declared that the opening of the lock (in today’s event) should be an inspiration for all to revive the age-old good tradition and to open doors to more knowledge of who we are in the days to come. 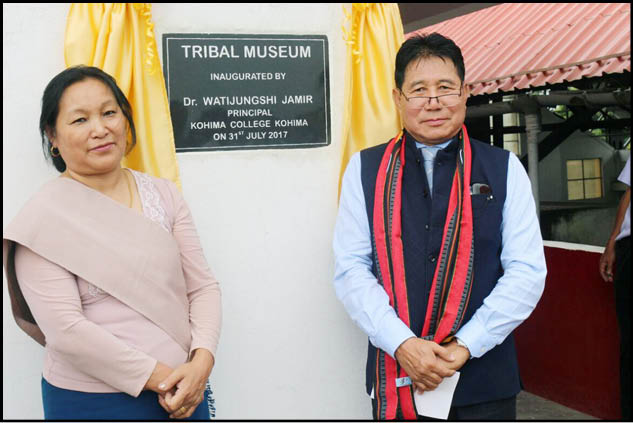